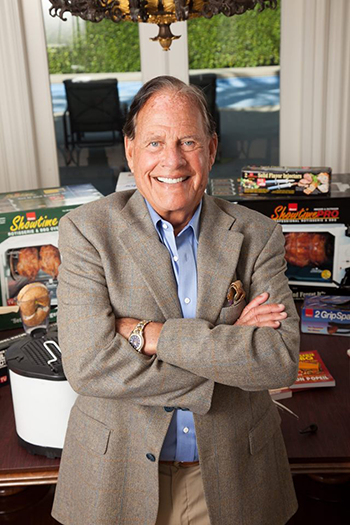 Ron Popeil was a famed American inventor, pitchman, television star, and the creator of the television “infomercial”.

Born Ronald Martin Popeil in New York City, May 3, 1935, Ron is the quintessential rags to riches tale. His parents Samuel J. (a kitchen gadget inventor), and Julia Popeil, divorced, and placed both Ron and his older brother, Jerry, in a boarding school at age three. Ron remained in a virtual orphanage until he was eight when his grandparents removed him to raise him in Miami, Florida. When he was thirteen Ron moved to Chicago to work in a factory managed by his father. At sixteen, Ron began to sell the very products his father’s factory produced in the flea markets on Maxwell street in Chicago. Storing his goods and table in the back of grimy fish store. Ron would start his day there at 5 AM to set up and would gross as much as $500 per day; a huge success for a kid in the 1950’s.

By age 17, Popeil had amassed enough of a savings to move out on his own and setup a stand at the flagship Woolworth store in Chicago. He hawked his gadgets six days a week, twelve hours each day. Popeil’s stand became an attraction with hundreds of people spending their lunch hours every day watching Ron’s pitch. During the state fair seasons, Ron took his show on the road becoming a staple of every major state fair.

In the early 1950’s after discovering the reach and power of the televised airwaves and their ability to beam his pitch into America’s living rooms, Ron created the first infomercial and commercials. Along with his partner at the time, Mel Korey, he produced the first minute long, black and white commercial for slightly over $500. The first television infomercial was for the Ronco Chop-o-Matic. It quickly spread nationally and made millions turning Popeil into a household name. This led to several generations of parodies by everyone from “I Love Lucy” to “Saturday Night Live”. By the 1960’s television became the exclusive venue for Ron’s pitching and selling and continued to be for the following 5 decades.

Some of Ron’s products included: The Chop-O-Matic, Mr. Microphone (the first Karaoke machine), the Popeil Pocket Fisherman, the Veg-o-Matic, the Buttoneer, the Smokeless Ashtray, Popeil’s Electric Food Dehydrator, the Inside-the-Egg Scrambler, GLH-9 (Great Looking Hair Formula #9) Hair in a Can Spray, Rhinestone stud setter (Later called the Bedazzler), the Cap Snaffler, the Popeil Automatic Pasta Maker, the Ronco Electric Food Dehydrator, the Ronco 6 Star Plus Knives, and the Showtime Rotisserie and BBQ. His product sales grossed in the billions and his media buys saturated American television for the better part of a century. Ron’s products are even featured in the Smithsonian Museum.

Ron Popeil was also a pioneer in the recording business. Ronco Records was one of the first in the recording industry to build compilations of well-known artists’ works and to package them for direct to consumer sales on television. This practice was later adopted by others and is still in use by Time Life and other music purveyors.

Popeil has been on more television channels for more hours in more markets for more years than virtually all other celebrities in American television history. Popeil’s sales format, pitch style, and catch phrases were almost immediately duplicated by dozens of other pitchmen. Most of the marketing sales on television today, and the “countdown pricing methods” are direct derivatives of Popeil’s works. The expression and branding “As Seen on TV” was first coined to describe Ron’s legendary success.

Many of the phrases and pitches Ron has used in his infomercials have become an inseparable part of America’s household and entertainment vernacular including: “Set it and Forget it”, “But wait, there’s more”, “Now how much would you pay?” and of course “Less Shipping and Handling”.

Parodies and acknowledgments of Popeil’s huge successes are still omnipresent in today’s media. SNL’s “Bass-O-Matic” (starring Dan Aykroyd) , “Popeil Galactic Prophylactic” (starring Eddie Murphy), were just the beginning. Since then, Popeil has been a part of countless variety & comedy acts, and has appeared as himself in both live action and animated television and films including “The X-Files”, “Sneakers”, “King of the Hill”, “The Simpsons,” “Old School”, “The Daily Show with Jon Stewart” and many others. He is a perennial on late night entertainment shows including “The Tonight Show”, “The Late Show with David Letterman”, and Conan O’Brien. His infomercials still remain a staple of late-night television.

A&E Biography, CNBC, History Channel, Discovery Networks, “Lifestyles of the Rich and Famous” and, “CNN's Larry King Live”, among others, have devoted entire 1 hour broadcasts to interviewing and covering Popeil’s legacy as an inventor, television star, and pop culture icon. Popeil has appeared on the cover of and has been featured in America’s top nationally circulated periodicals and newspapers (Including but not limited to: People Magazine, The New York Times, The Wall Street Journal, USA Today). Hundreds of hours of network news reports have been spent covering him, and numerous documentaries and books have been published covering the Popeil phenomenon. Long-form network news reports have featured Popeil on NBC News, ABC News, CBS News, Fox, and all of the cable news outlets. He has also been the recipient of numerous honors and awards for achievements in marketing, design, and entertainment including the Electronic Retailing Association’s Lifetime Achievement Award and the IG Nobel Prize.

Popeil also helped build the brand QVC with exclusive packaging and airings, Popeil’s appearances consistently established new benchmarks for success in direct marketing on television. In 2000, Popeil broke worldwide sales records by selling over $1 million worth of his Showtime Rotisseries during a one-hour live airing on QVC television (selling approximately 150 units each minute to viewers). Ron Popeil passed away peacefully surrounded by his family on July 28, 2021.

Owner: Ron's Enterprises, Inc.
June 2006 – 2021 | Beverly Hills, CA
The 5in1 Fryer and Food Cooking System with infomercial is my latest and I think it will be my most successful invention. The last one, my Rotisserie did around 1 billion , 400 million in sales in about a 12 year period! This business (which can come with my name and face for other products) is available right now and I am available to talk about it.

Author: The Salesman of the Century
Here is the rags-to-riches story of the man who sliced, diced, and julienne his way into our hearts and wallets - Ron Popeil - packed with hands-on, nuts-and-bolts guidance on how anyone with a product idea can make big money.

Ron’s success has brought him much attention from the print, radio and television media which includes appearances on shows such as NBC’s Rock Center, 20/20, CNN Pinnacle, The Today Show, Evening News With Tom Brokaw, Good Morning America, Primetime, Headline News, Lifestyles of the Rich & Famous, The Late Show with David Letterman, The Tonight Show with Jay Leno, Late Night With Conan O'Brien, CNN’s Larry King Live , Maury Povich, among others as well as countless news bites.

Many of the phrases and pitches Ron has used in his infomercials have become nothing short of not just the household but entertainment vernacular, such as, “Set it and Forget it”, “But wait, there’s more”, “Now how much would you pay” etc... Parodies of Ron’s marketing method abound including; SNL’s “Bass-O-Matic” (starring Dan Akroyd) , "Popeil Galactic Prophylactic" (starring Eddie Murphy), a “Set it and Forget it”, political satire clip on The Daily Show (with Jon Stewart), and countless references to and montages of his commercials are used in teleplays and screenplays, (Supernatural, XFiles, King of the Hill, The Simpsons, Futurama, The Kingdom, Old School, Elizabethtown etc…). In short, Ron’s breakthrough commercial method and pitches coupled with his longevity on the air have made him a veritable pop icon.

Huffington Post – Where is Ron Popeil When You Need Him?

How I Did It: Ron Popeil, Ronco

TMZ – What Ron wished he invented

TMZ – Hey Harvey, How does the Turkey Fit in this Small Fryer?

product2market - The Finest Marketing Leaders of All Time

Some of the Products that Ron Popeil Has Invented or Marketed